The material that is used for the reflective layer of a blank CD or DVD is a critical factor in the failure rate of the disc. The layer reflects the laser beam back to the laser photosensor in the laser head, so if this reflection is not precise and consistent, the disc will incur errors when writing to it or reading data from it.

In tests using new optical drives (under 1 year old), the failure rate of burning content onto the aluminium discs was greater than 10% for DVDR and more than 13% for CDR compared to zero failures for silver.  However, when used on the older optical drives (over 1 year old), the burning failure rate was notably higher – over 15% for DVDR and over 25% for CDR, again compared to a zero failure rate for silver.  In addition, when executing the error rate tests, the silver layer products all performed within the book specifications (DVD: PI sum8<280 and CDR: C1<220) while all of the aluminium discs were out of spec., with significantly higher errors recorded when tested on optical drives over 1 year old.

These performance differences can be attributed directly to the inferior reflectivity of the aluminium layer compared to that of silver.

Optical media is also susceptible to corrosion, particularly in transit on-board ship where it can experience high temperatures and humidity.  Aluminium oxidizes on exposure to oxygen from the environment or to moisture that has penetrated the disc which diminishes its reflectivity, making the disc unreadable by the laser - sometimes referred to as disc “rot.” Silver can also lose reflectivity with corrosion on exposure to sulfur dioxide, an environmental pollutant that can migrate through the disc with moisture.  However, the Reliability Test showed that all the silver products passed the 100 hour heat and humidity test, which checks for length of time a disc can be exposed during shipment and storage and also its archiving capabilities.  In contrast, all of the aluminium CDs and DVDs failed to reach the 100 hour mark. 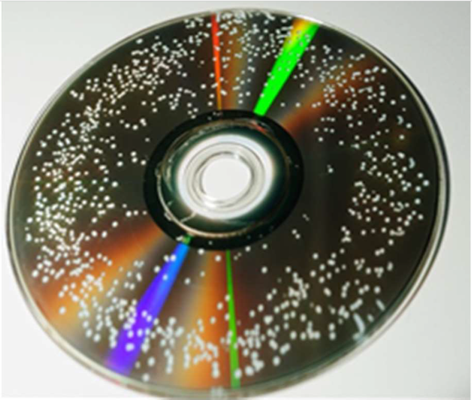 In purchasing blank media, the material used for the reflective layer may not be something that is ever considered, but it is clear from this analysis that it is a key attribute and should be part of the selection criteria. The lower reflectivity of aluminium results in significant writing and reading failure rates, which is further exasperated when using optical drives that are older and have weaker lasers. Aluminium discs also have increased problems with corrosion, and there is another known issue with aluminium discs in that they become hotter when in use, which can speed up the decay of the reading head of the optical drive.

So when buying optical media, although there may be a slight price difference, it’s difficult to argue against choosing silver every time.

Notify me when back in stock
Thank you for your interest in this product.
If the product is back in stock within the next 120 days, you will be notified.
Some issue with form submission. Please try again later.

How can we help?